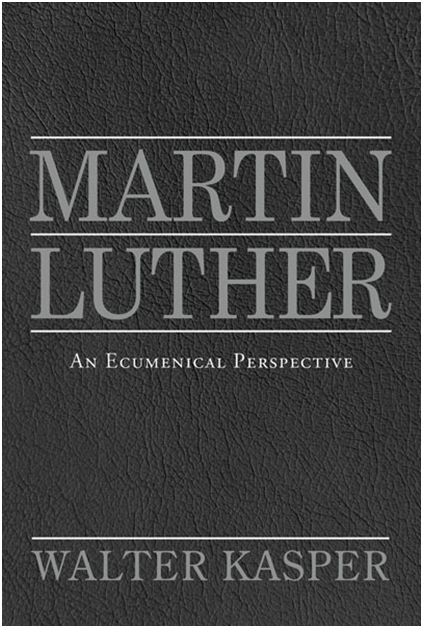 from a Catholic cardinal and theologian.

Cardinal Walter Kasper was born the same year as my father, 1933. This makes them both 84 years old, as of this writing in 2017, the 500th anniversary of the Reformation. Kasper has a PhD in Theology and is a Professor of Dogmatics. From 1989 to 1999, he served as Bishop of the Diocese of Rottenburg-Stuttgart. In 2001, he became cardinal. He served as the President of the Pontifical Council for Promoting Christian Unity from 2001 to 2010, among many other appointments. He is the main author of the first volume of the Katholischer Erwachsenenkatechismus and the editor-in-chief of the third edition of the Lexikon für Theologie und Kirche.

Kasper does something extremely difficult. He gives us a snapshot of Luther in just 56 pages.

Luther and the Reformation are extremely complicated, multi-faceted topics. Kasper does not disappoint. His books are able to capture the key landscapes in so few pages. Martin Luther: A Very Short Introduction by Scott H. Hendrix is one exception. To Hendrix, I would add Kasper.

Kasper recognizes Luther’s piety and intellect. He names the corruption that led to the Reformation, while at the same time pulling no punches as to the problems left in the wake of the bloody Reformation.

All the usual catalysts for society are mentioned: Copernicus, Columbus, Guttenberg, the fall of Constantinople, the expulsion of Jews and Muslims from Spain in 1492. Kasper mentions efforts at church reform before and after the Reformation. He recognizes the sale of indulgences as an abuse, and points out that it was outlawed five years before Luther was born, though not stamped out. He summarizes the state of medieval theology with a synchronous that only someone who has taught systematic theology and history can achieve.

Kasper goes on to summarized the theology of justification with a clarity that most Lutherans will find stunning. In so doing, Kasper characterizes Luther as a reformed Catholic, stating, “Luther vanquished a Catholicism that was not really Catholic and consequently rediscovered something that was primordially Catholic.” He believes that Luther’s concern in the 95 theses is a thoroughly Catholic concern.

Kasper goes on to say, “Luther’s call for repentance was not heard in Rome and by the bishops at that time. Instead of being penitent and responding with the necessary reforms, Luther was answered with polemic and condemnation.” Luther went to the Leipzig disputation expecting a debate but instead received an ultimatum: recant or else.

Hearing a doctor of the church recognize Rome’s complicity in the church-dividing Reformation should free us to be honest about the Luther’s challenges. His vicious and vulgar invective did not lend itself to debate. His anti-Semitism left a legacy whose damage cannot be quantified. And the emergency ecclesiology left by the schism somehow became calcified into a somewhat convoluted ecclesiology today.

Kasper spends a little time on any of that. He does pointed out that the Reformation left us with state churches and denominational Christianity. He has firm command of many of Luther’s key writings, such as To the Christian Nobility of the German Nation, On the Papacy in Rome (1520) and On the Bondage of the Will (1526).

Melanchthon made it clear the Lutherans were prepared to submit to the Pope and recognize the historical office of bishop, as long as priests were free to preach the gospel of justification by grace through faith and not the indulgence. But these overtures failed. The split was complete.

While the Catholic Church spread to Latin America and other places of the world, taking on an increasingly global character, the state-church situation of the Lutheran territorial churches led to local, particular culturally-bound churches. Any Lutheran bishop can confirm that this is still a challenge today. Various Lutheran bodies often define Lutheranism in cultural rather than theological terms.

Kasper looks to the 500th anniversary as an opportunity for Lutherans and Catholics to update their understanding of Luther. We can ask what Luther has to say to us in the age of ecumenism. As my friend, John Nunes, said to me once, “When we speak of diversity in the church, are we not speaking of catholicity?”

Catholics, Lutherans, and others have now an opportunity to overcome our denominational self-reference. “Catholics have learned from Protestants the importance of the Word of God and the Bible, and Protestants have learned the importance of sacramental symbolism and liturgy. Both churches have been enriched by ecumenism.” Our bilateral dialogs have revealed that many of the antitheses between our churches have been based on misunderstandings.

Kasper admits that the Protestant model for church and the Catholic model for church are incompatible, and therefore our dialogues have resulted in a little visible unity in the life of our congregations. Protestant and Catholic thesis/antithesis polemics have blocked the proclamation of Christ.

While Luther and his opponents were not ecumenism in the modern sense, there is room for hope. Luther was open to the historic episcopacy. He said he would kiss the feet of a Pope who would acknowledge the gospel of justification. We can listen, be on the polemical Luther to the mystical Luther. We can listen deeply to On the Freedom of a Christian. We can embrace an ecumenism that listens to and learns from each other.

Kasper invites us to think about a perhaps apocryphal statement of Luther, “If the world was going to end tomorrow, I would still plant a little apple tree today.” Indeed, Cardinal Kasper planted a linden tree in Luther Garden in Wittenberg. As a return gesture, Lutherans planted a small olive tree at the Roman Basilica of St. Paul Outside-the-Walls. Perhaps the way forward for the church lies in some simple acts of kindness and mercy. The work is slow, but we are closer today than we were 500 years ago.

The good cardinal reminds us we are no longer on the path of division, but on a path of unity. Books like this give me hope that we can commemorate the 500th anniversary of the Reformation with an eye to proclaiming the gospel, rather than tearing one another down