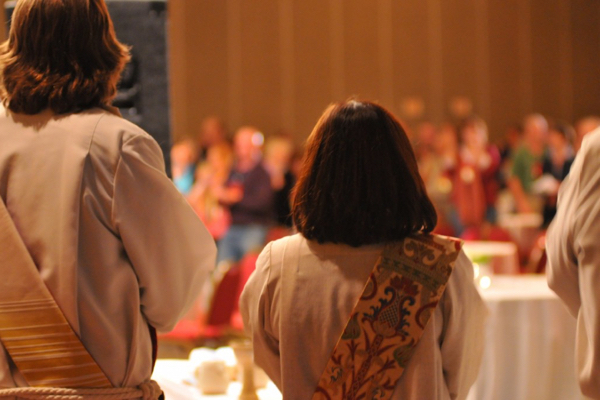 Lutherans believe in the Triune God. God created and loves all of creation — the earth and the seas and all of the world’s inhabitants. We believe that God’s Son, Jesus Christ, transforms lives through his death on the cross and his new life, and we trust that God’s Spirit is active in the world. We are part of God’s unfolding plan. When we gather for worship, we connect with believers everywhere. When we study the Bible or hear God’s word in worship, we are drawn more deeply into God’s own saving story.

The convictions shared by Christians from many different traditions are expressed in statements of belief called creeds.

These ecumenical creeds that Lutherans affirm and use in worship confess the faith of the church through the ages and around the world.

The Confession of Faith of the Evangelical Lutheran Church in America is part of our founding constitution.

The ELCA accepts the following creeds as true declarations of the faith:

The Apostles’ Creed as we now have it dates from the eighth century. But in truth its roots are in the “Old Roman Creed,” which was used in some parts of the ancient church as early as the third century. Before the Old Roman Creed, in turn, were variations rooted in the New Testament itself. While this creed does not come from the apostles (Jesus’ followers sent to share the good news), its roots are apostolic (in keeping with the teaching of the New Testament apostles). The creed describes the faith into which we are baptized and therefore is used in the rites of Baptism and Affirmation of Baptism.

I believe in God, the Father almighty, creator of heaven and earth.

I believe in Jesus Christ, God’s only Son, our Lord, who was conceived by the Holy Spirit, born of the virgin Mary, suffered under Pontius Pilate, was crucified, died and was buried; he descended to the dead.* On the third day he rose again; he ascended into heaven, he is seated at the right hand of the Father, and he will come to judge the living and the dead.

I believe in the Holy Spirit, the holy catholic Church, the communion of saints, the forgiveness of sins, the resurrection of the body, and the life everlasting. Amen.

or “he descended into hell,” another translation of this text in widespread use.

The Nicene Creed was first adopted by church leaders in 325 at the First Council of Nicaea. Later that century, at the Council of Constantinople (381) some minor changes were made and it was again reaffirmed at the Council of Chalcedon (451). This ecumenical creed is the most widely accepted creed in the Christian faith and it is an essential part of the doctrine and liturgy of Lutheran churches. Historically it has been used at Holy Communion on Sundays and major feasts.

We believe in one God, the Father, the Almighty, maker of heaven and earth, of all that is, seen and unseen.

We believe in one Lord, Jesus Christ, the only Son of God, eternally begotten of the Father, God from God, Light from Light, true God from true God, begotten, not made, of one Being with the Father; through him all things were made. For us and for our salvation he came down from heaven, was incarnate of the Holy Spirit and the virgin Mary and became truly human. For our sake he was crucified under Pontius Pilate; he suffered death and was buried. On the third day he rose again in accordance with the Scriptures; he ascended into heaven and is seated at the right hand of the Father. He will come again in glory to judge the living and the dead, and his kingdom will have no end.

We believe in the Holy Spirit, the Lord, the giver of life, who proceeds from the Father and the Son,* who with the Father and the Son is worshiped and glorified, who has spoken through the prophets. We believe in one holy catholic and apostolic Church. We acknowledge one Baptism for the forgiveness of sins. We look for the resurrection of the dead, and the life of the world to come. Amen.

This creed is of uncertain origin. It was supposedly prepared in the time of Athanasius, the great theologian of the fourth century, but many scholars have theorized that it seems more likely that it dates from the fifth or sixth centuries because of its Western character. It communicates two essential points of Bible teaching: that God’s Son and the Holy Spirit are of one being with the Father; and that Jesus Christ is true God and true man in one person. Traditionally it is considered the “Trinitarian Creed.” In many congregations it is read aloud in corporate worship on Trinity Sunday, the Sunday after Pentecost.

Whoever wants to be saved should above all cling to the catholic faith.

Whoever does not guard it whole and inviolable will doubtless perish eternally.

Now this is the catholic faith: We worship one God in trinity and the Trinity in unity, neither confusing the persons nor dividing the divine being.

For the Father is one person, the Son is another, and the Spirit is still another.

But the deity of the Father, Son, and Holy Spirit is one, equal in glory, coeternal in majesty.

What the Father is, the Son is, and so is the Holy Spirit.

Thus the Father is God; the Son is God; the Holy Spirit is God: And yet there are not three gods, but one God.

Thus the Father is Lord; the Son is Lord; the Holy Spirit is Lord: And yet there are not three lords, but one Lord.

As Christian truth compels us to acknowledge each distinct person as God and Lord, so catholic religion forbids us to say that there are three gods or lords.

And in this Trinity, no one is before or after, greater or less than the other; but all three persons are in themselves, coeternal and coequal; and so we must worship the Trinity in unity and the one God in three persons.

Whoever wants to be saved should think thus about the Trinity.

It is necessary for eternal salvation that one also faithfully believe that our Lord Jesus Christ became flesh.

For this is the true faith that we believe and confess: That our Lord Jesus Christ, God’s Son, is both God and man.

Although he is God and man, he is not divided, but is one Christ.

He is united because God has taken humanity into himself; he does not transform deity into humanity.

He is completely one in the unity of his person, without confusing his natures.

For as the rational soul and body are one person, so the one Christ is God and man.

He suffered death for our salvation. He descended into hell and rose again from the dead.

He ascended into heaven and is seated at the right hand of the Father.

He will come again to judge the living and the dead.

At his coming all people shall rise bodily to give an account of their own deeds.

This is the catholic faith. One cannot be saved without believing this firmly and faithfully.

Text prepared by the International Consultation on English Texts (ICET) and the English Language Liturgical Consultation (ELLC). Reproduced by permission.

We don’t know where you are in your faith walk, but we understand that questions are worth answering. We hope this overview will provide a start.